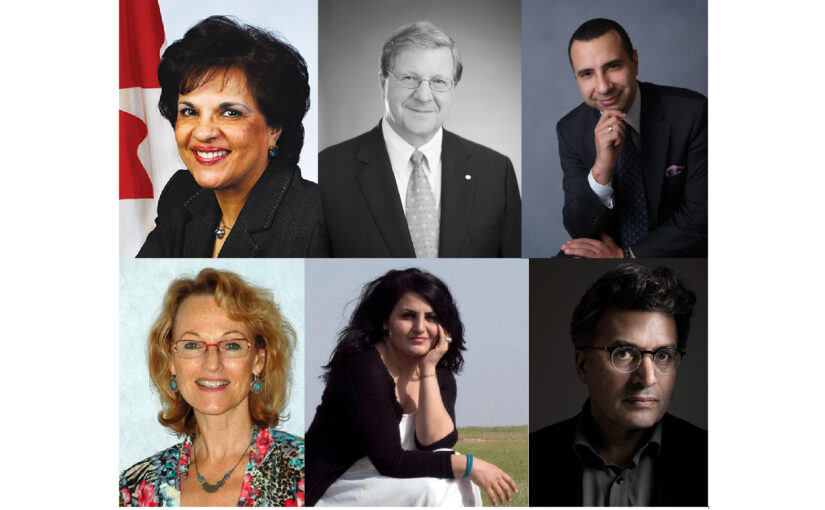 The Clock is Ticking: The Urgent Situation Unfolding for the Yazidi
Discussion Dec 12 2020

Discussion panelists offered their knowledge and insight into the state of the Yazidi in Iraq’s refugee camps and in Sinjar, the Yazidi homeland destroyed by ISIS, including recommendations for what actions can be taken to help them.

The Women Refugees Advocacy Project (WRAP) formed to alert Canadians to the plight of Yazidi women and girls who survived extreme torture and genocide by ISIS. When Canada brought 1,200 of the women and girls to Canada as refugees, we then petitioned the federal government to keep their promise to provide comprehensive trauma care. Unfortunately, to no avail.

WRAP produced The Least We Can Do documentary following the efforts we and so many others made to support the Yazidi trauma care petition. The film premiered at the One World Refugee Film Festival, followed by The Clock is Ticking discussion.

PANEL BIOGRAPHIES
The Honourable Mobina S. B. Jaffer QC, Senate of Canada
Senator Mobina Jaffer represents the province of British Columbia in the Senate of Canada, where she is deputy-chair of the Standing Senate Committee on National Security and Defence. Appointed to the Senate on June 13, 2001, she is the first Muslim senator, the first African-born senator, and the first senator of South Asian descent.

After spending almost a decade with the Standing Senate Committee on Human Rights, Senator Jaffer served as Canada’s Special Envoy for Peace in Sudan from 2002 to 2006. From 2002 to 2005, she chaired the Canadian Committee on Women, Peace, and Security. Senator Jaffer is often invited to speak at international conferences on security issues and the United Nations Security Council Resolution 1325, which “urges all actors to increase the participation of women and incorporate gender perspectives in all United Nations peace and security efforts” and “calls on all parties to conflict to take special measures to protect women and girls from gender-based violence, particularly rape and other forms of sexual abuse, in situations of armed conflict.” As a grandmother, women’s rights and children’s rights are central to Senator Jaffer’s advocacy.

The Honourable Lloyd Axworthy, World Refugee & Migration Council
The World Refugee & Migration Council is an international body established to develop solutions to problems in the current refugee system. As Council chair, Axworthy is one of Canada’s leading voices on global migration and refugee protection. After a 27-year political career, where he served as Canada’s minister of Foreign Affairs and minister of Employment and Immigration, among other postings, Mr. Axworthy has continued to work extensively on human security, refugee protection and human rights in Canada and abroad.

As Minister of Foreign Affairs, Axworthy was known for advancing the international Treaty on anti-personnel land mines, the International Criminal Court, and the Protocol on Child Soldiers. He was presented with the Pearson Peace Medal by the Governor General of Canada in May 2017. In his term as president and vice-chancellor of the University of Winnipeg, Mr. Axworthy initiated innovative programs for migrant and aboriginal youth communities, and has done a great deal of work on refugee reform as a Richard von Weizsäcker fellow at Germany’s Robert Bosch Academy.

Rev. Majed El Shafie, founder of One Free World International
El Shafie is an international human rights advocate. His human rights journey started in his native Egypt that he was forced to flee after being severely tortured and sentenced to death for his conversion to Christianity and bringing awareness to human rights violations related to religious persecution. As a survivor of religious persecution, he has advocated for religious freedom, confronted governments that violate this fundamental right, and conducted fact-finding missions and humanitarian/rescue operations.

One Free World International is one of the leading organizations advocating for religious minorities globally and has 28 branches around the world. As president, El Shafie has successfully organized and led delegations of parliamentarians and religious leaders to address minority rights and humanitarian issues. His significant knowledge and insight into the dynamics of persecution of religious minorities by religious extremists and totalitarian governments alike will be invaluable during our discussion.

A pioneer in treatments for pain relief, she has implemented pain management programs for children and parents, and has taught pediatric professionals throughout the US, UK, Italy, France, Switzerland, Germany, Finland, Australia, Turkey, New Zealand and in the Middle East. Dr. Kuttner is involved and influential in the pediatric medical care of infants, children, adolescents, and young adults. Dr. Kuttner is a member of the Women Refugees Advocacy Project.

Aveen is an Ezidi artist and humanitarian activist
Aveen and her family were forced to flee Iraq when the Gulf War broke out in 1990. Living in a refugee camp at age seven, Aveen’s favourite pastime was drawing in the mud with dry twigs. In 1993, she and her family were sponsored by the Canadian government and settled in British Columbia. Finally living in peace without the worries of war, Aveen had time to explore and develop her passion as an artist.

When the 2014 genocide by ISIS began on August 3rd, Aveen launched a GoFundMe campaign for the Yazidi trapped on Mount Sinjar. She later flew to Iraq to provide support. As the international community heard about the Yazidi for the first time in the wake of the genocide, Aveen wrote and designed a book called Children of the Sun to teach people about the Yazidi religion, culture and traditions. Aveen spoke out on behalf of the Yazidi people in 2018 at the Canadian Parliament Press Gallery in Ottawa. Working with the Women Refugees Advocacy Project, she gave voice to the Yazidi crisis in Sinjar at a Sept 15th 2020 Press Conference, live streamed to the world.

Dr. Kizilhan was the chief psychologist of the Special Quota Project for Vulnerable Women and Children in Northern Iraq, funded by the State Government of Baden- Württemberg. Nadia Murad, the Nobel Peace Prize winner 2018 was one of survivors taken by Kizilhan for treatment to Germany. In that capacity he has made frequent visits to the Kurdistan Region in Iraq, as part of a project aiming to provide psychological aid to Yazidi women who escaped after being captured and enslaved by ISIS. He and his students are currently treating hundreds of traumatized women in the refugee camps in Kurdistan, Provinz Duhok.